Book: Aarhus by Bike - From Viking Village to the Biggest Harbour in Denmark 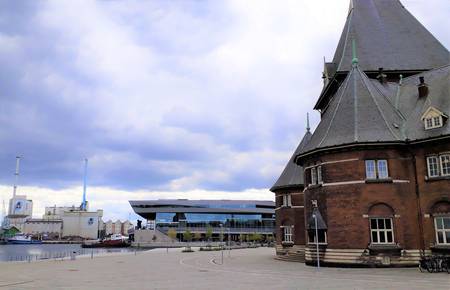 Book: Aarhus by Bike - From Viking Village to the Biggest Harbour in Denmark

A bike ride is a fast and pleasant way to discover a bigger part of Aarhus city. On this tour you will see the highlights of Aarhus. A city that since the founding by the Vikings has been one of the richest and most important cities in Denmark.

I will show you the astonishing development of the city, from medieval merchant town to modern metropolis.

We will venture out in the street that used to be the grimmest alley in Denmark. Next stop is the oldest stone church in Scandinavia. Furthermore we will visit the impressing Cathedral of Aarhus that is located in the cosy Latin Quarter with lots of old and beautiful buildings. I will reveal to you how a real estate company ended in a cowshed.

From here we will ride round Aarhus Ø which offers a beautiful view of the bay of Aarhus. Here you will see how an old container terminal can be turned into a modern part of the city with the most daring architecture.

Next destination is the old harbour of the city from 1861. This harbour sparked an astonishing development that transformed Aarhus from a medieval town to an industrial powerhouse. The signs of this development are still around as well as the heavy industries that was formed here in the beginning of the 20th century. You will also find out how an abattoir ended up right next to modern office buildings.

We will ride through the living quarters of the first industrial workers of the city to see where and how they lived.

At the end we will see the distinct City Hall in Aarhus and the modern landmark of the city, the museum of art ARoS.