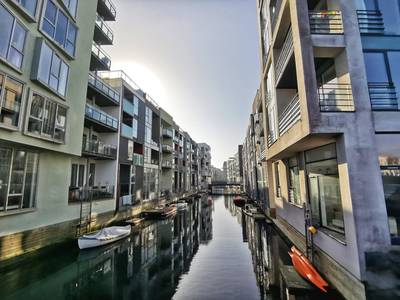 Visit and experience an alternative and contrasting Copenhagen South Harbour by the water, on bicycle.

For many years, Copenhagen's South Harbour had the reputation of being Copenhagen's poorest worker neighbourhood, where alcoholics hang out on every street corner. In recent years, there has been a rapid development in the area which creates some exciting contrasts. The South Harbour has suddenly become an attractive place to live and visit.

On this bicycle tour we will visit both the old and authentic South Harbour, the alternative South Harbour with the various forms of housing, such as the houseboats, the allotment garden area, the marina and the newer areas by Sluseholm canal town and Teglholmen. We will also visit some of the area's green oases, including Sydhavnstippen, where we may be lucky to spot the cute sheeps or alpacas that live there.

As the South Harbour is a large area and I would like to give you the whole experience, the tour will be on bicycle. In fact, it is also the most local and Copenhagen way to get around in the city. We will meet at the bicycle rental place, Baisikeli Rent a bike, Ingerslevsgade 103, 1705 Copenhagen, right by Dybbølsbro's S-train station. Here we hop on the rented bicycles and start the tour. The tour takes a total of 4 hours, from the time we all get the bicycles and hit off, and there is a stop included on the route for a little refreshment.