Medieval and Renaissance Churches in Odense 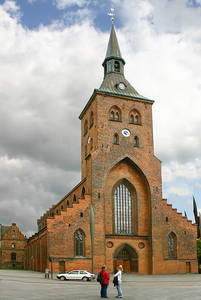 In the Middle Ages there were four churches in Odense: Sct. Albany Church, Church of Our Lady, Sct. Hans Church - with the outside brick pulpit and Sct. Knuds Church (Odense Cathedral). The last three of these still exist today.

In 1086, king Canute the Holy was killed in front of the high altar in Sct. Albany Church. Only 15 years later, this brutal ruler was canonized because of the scene of his murder and Odense got a new cathedral named after Sct. Canute.

The cathedral is the finest gothic building in Denmark and absolutely worth visiting. It is also known for its altarpiece made by Claus Berg.