Colonial Denmark and the Slave Trade 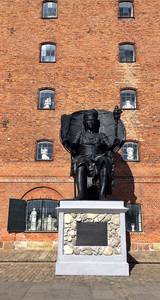 Learn about Denmark's colonial history and its influence on Copenhagen

Copenhagen has many buildings that are rooted in Denmark's colonial history and international trade. That is to say, Northatlantic, Eastern Asian and Caribbean trade.

The Caribbean or West Indian trade focused mainly on slaves obtained in West Africa and employed in slave labour on the Caribbean islands.

Recently more interest has been shown for Denmark's colonial history: Especially for the country's role in the slave trade. That's the reason for two new statues in Copenhagen harbour. One of them is an official gift from a former Danish colony - The Virgin Islands - by the name of ''Freedom''. The other is an art-project named ''I am Queen Mary''.

Hear about the hidden stories held inside these old Copenhagen buildings.

This city walk can be combined in many ways, for example in combination with the permanent colonial exposition at the National Museum.

We'll meet at Christianshavn square and walk down to the former East Asian square at the harbour. From here we'll follow the harbour to Greenland's market square, crossing  Inderhavnsbroen (a bridge) to Nyhavn. From there we'll continue to Toldboden where ''I Queen Mary'' stands. We'll walk up to Amalienborg, where the royal family resides, and then back to Nyhavn and Kongens Nytorv, which is central in the story about the abolishment of slavery.

If you would prefer more focus on the racism involved in the slave trade, we can include Kastellet. Once an African chief was held prisoner there for enslavement, sale and murder of other Africans; a surprising account that reveals that the history surrounding the Transatlantic slave trade isn't as black-and-white as we might think.