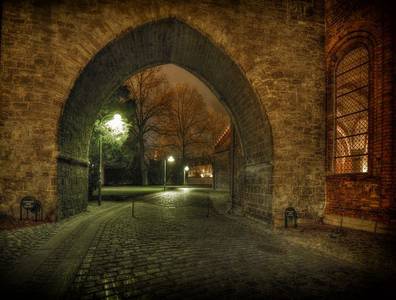 A captivating walk in search of Roskilde's living history

When Harald Bluetooth (died in 987) moved to Roskilde, the city became Denmark's capital for several centuries. This still marks the city. Among its many churches, the cathedral is still the burrial place for Denmark's kings and queens. We'll meet in front of the Cathedral and walk to St. Laurence Church of which nowadays only the tower and the crypt remain. With a bit of luck we'll even make a visit to the crypt below street-level.

The next destination is the cathedral, which is exactly like a trip through Denmark's ancient history. Kneel in front of the holy altar, on the exact spot where Ulf, Danmark's Earl, was murdered by the sword 995 years ago; take a look at kings of the Reformation and Frederik II's magnificent tomb; walk along Christian IV's humble sarcophagus from 1648.

Once again outside we'll go to Absalonbuen, the Absalon vault, possibly Denmark's oldest building still standing. If time allows us, we'll take in our last sights at St. Ib's church which dates back to the middle of the 12th century before we'll end the tour by the harbour.