A Hike in Syvårssøerne -The Seven Year Lakes - at Frederikshåb Plantation 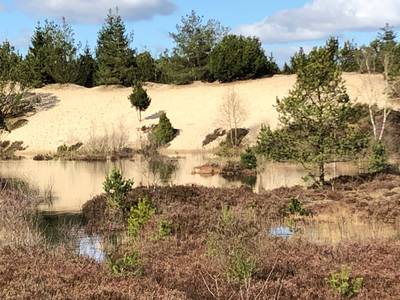 Syvårssøerne, the Seven Year Lakes, at Frederikshåb Plantation is at moment one of Denmark's biggest natural attractions, as the water level in the mystical "Syvårssøerne" is very high, and numerous paths in the area are flooded. A hike here is an exciting experience.

I myself is very enthusiastic about this hike, where we walk around the big sand dunes in Randbøl moor. Here we will pass over the 17m high Stoltenberg. A sand dune shaped by the wind collecting sand on the otherwise flat and heather clad moorland. It is difficult here to believe that you are not in the big seaside dunes at the west coast by the North Sea.

The tour continues in Frederikshåb Plantation where we hike along the lakes Syvårssøerne. The "Seven Year Lakes" are not always here which is the mystical part as the lakes emerges and disappears in fluctuation with the groundwater level. For centuries it was noticed that they appeared around every seven years. The hike at Syvårssøerne is a hike you can do again and again every season of the year. No matter when you pass by, the nature is always beautiful - even in rain and clouded weather. If you bring kids along, the tour offers possibility for play time in the great sand dunes.

Besides the mystical and very beautiful nature, we will also encounter multiple historical sites from WW2 when Denmark was occupied by German forces and the German occupational forces used the area as a secret airfield. In the area there are among other things an airplane hiding spot, field kitchen, personal bunker fuel lines and a bunker for fuel.

A guided hike which is very exciting for kids as well as adults.