Book: Historic Walk of the Old Part of Randers

Historic Walk of the Old Part of Randers 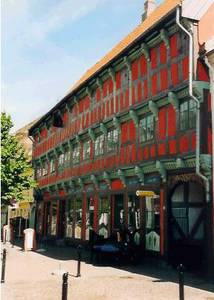 Book: Historic Walk of the Old Part of Randers

The market town of Randers has a fascinating history that dates back to the 13th century. Randers became famous after the Danish national hero, Niels Ebbesen, in 1241, killed count Gert of Holstein in Randers. For this reason to this day there is a statue of Niels Ebbesen in Randers.

In more recent times, since the later part of the 19th century, Randers has become known as a town of heavy industry including the building of trains and for its harbour with its practical position at the base of the fiord of Randers.

In fact Randers is one of very few Danish towns that has kept part of its industrial production at the town centre and its port is still primarily an industrial port like all ports were in Denmark in the early part of the 20th century. For this reason to see original industrial buildings in use in their original settings and environment you must come to Randers.

This historic walk will show you the old part of the town of Randers and I will tell you all about its fascinating history and show you the many well-preserved old houses from the past.