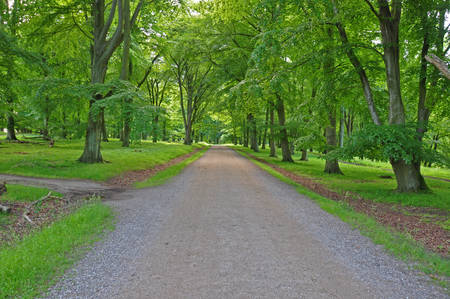 Raadvad is "the craddle of industrialism" in Denmark - where the first factory mills were built near the water. Today the area is part of the National Museum and can be explored on its own.

It is a beautiful forest and lake area on the northern outskirts of the Deer Park. We start next to Raadvad Inn. We walk through the birch and oak forest and across the plain towards the little palace, Eremitage Slottet, which was built as a royal hunting cottage. It's situated in the outskirts of the forest overlooking a large plain with hundreds of grazing deer. On the way we pass the oldest golf club in Scandinavia (1898), and it often happens that some of the more than 2000 deer in the park might be found in the middle of the fairway or even on the greens while golfers are playing.

From the palace Eremitage Slottet we might be able to see the coast of Sweden. We continue east and end up in the Taarbæk Marina with its distinct maritime atmosphere.

We walk on gravel and forestry roads and mainly even terrain.