The Castle of Copenhagen, Center of Power - a Journey Through 900 Years 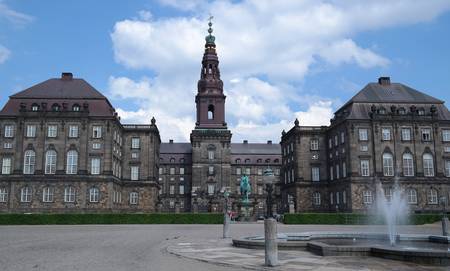 Christiansborg: The Queen's Reception Halls, the Prime Minister's Office, and the Parliament

In 1157 King Valdemar the Great donated the fishing hamlet, Havn, with its catchment area to his foster brother, Absalon, Bishop of Roskilde. Absalon soon raised a castle on an artificial island off the shore. Our tour begins in the remnants of this castle, for the walls still stand, deep under the present castle and castle square.

Following this, we shall walk around on ​​the "Castle Island" of what would be known as the Copenhagen Castle. At the beginning of the 15th century, Copenhagen became the capital of Denmark, and the castle became the center of power for the Kalmar Union of Denmark, Norway (including Greenland and Iceland), and Sweden-Finland.

In 1733, the medieval castle was rebuilt into a dreamlike baroque castle, which, however, partially burned down in 1794. The burned-down parts were rebuilt in the classicist style by C. F. Hansen in 1828, of which the Castle Church remains, while the central parts of the castle burned again in 1884. The present castle was inaugurated in 1928.

In the last half of the tour, we shall see the Queen's reception halls and the Throne Room within the castle, which are open to the public when Her Majesty does not use them. Here we shall review the entire history of the castle and the kingdom, aided by the extraordinary tapestries.

Time permitting, we may visit the Castle Church.

The tour begins and ends in the Inner Courtyard of the castle.

Book prefered timeRate per group from DKK Rates
Book The Castle of Copenhagen, Center of Power - a Journey Through 900 Years
See Terms of Agreement
Book now