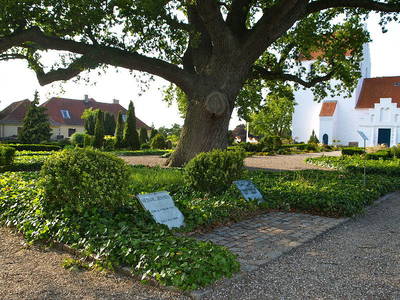 Enjoy some of Funes beautiful nature and scenery on a guided coach tour following the romance of Elvira Madigan and Count Sixten Sparre.

Love and death in the Romantic era. The circus princess Elvira Madigan and Count Sixten Sparre's dramatic love story came to an end in July 1889, caused by their deaths in Nørreskoven, a wood on the small island of Tåsinge.

The couple had checked into Hotel Svendborg as "the bridal couple Count and Countess Sparre" after they had fled "the profane mob" in Sweden. The 19th century social norms made their alliance impossible, and because they were both drowning in debt, they decided to leave the town of Svendborg and sail to the island of Tåsinge.

We'll drive through the street Grønnegade, where the couple stayed in a pension. In the town Bregninge, we'll go up the church tower, just like the couple did on one of their excursions.

Their visit to the church tower gives us an idea of what really happened. On Thursday, the 18th of July 1889, they left their lodgings in Troense with a picnic basket, as they were going on a longer excursion. On the 22nd of July the wife of the local raspberry picker Markus Clausen found the bodies of Elvira and Sixten in the wood Nørreskoven. I'll show you where they were found.

The last stop on the tour is Landet Cemetery, where a merciful brother allowed the couple to be buried side by side, provided a wall was built between the two graves.