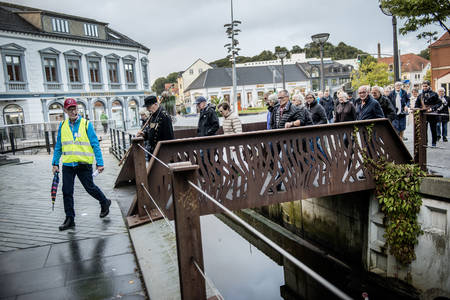 Vejle in the south eastern Danish peninsula Jutland was founded in the Middle Ages as a port.

For many years Vejle was a very small place with only a few hundred inhabitants. Slowly Vejle developed into a town of trade being strategically well positioned by the sea and surrounded by streams on which boats could take cargo from the inner parts of Southern Jutland to the port of Vejle and from Vejle's port it could be shipped out to the rest of the world.

Vejle was occupied by Austrian and Prussian forces during both of the wars of Sleswig 1848-50 and 1864. Wars with a significance for the Danish perception of being a Dane and the shaping of Denmark in those years but most likely these two wars mean nothing to you or your country. In the later part of the 19th century and the early part of the 20th century, Vejle became a well known industrial town especially known for its iron foundry and its woollen mill, at both of which a large part of Vejle's work force was employed.

Today Vejle is famous for its modern architecture at the old port area and for being a town always at the forefront of development in any field.

Let me guide you through Vejle's history and the vibrant town Vejle is today - I love my town.