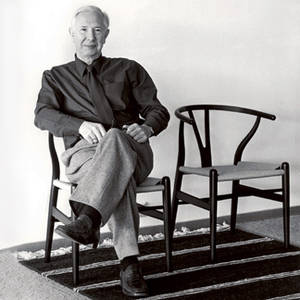 "A chair is only finished when someone sits in it"

Denmark's international reputation as a design nation was founded in a golden period after World War II with the style known as "Danish modern". Prior to this there was a period with focus on functionality and design for everybody, containing a desire that everyone should have the right and opportunity to buy decent furniture at a reasonable price.

This concept continues even today not only in Denmark but also in the other Scandinavian countries. Out of this thinking has also great contemporary giants such as Swedish IKEA occurred.

One of the great heroes in the modern Danish design adventure is Hans Jorgen Wegner (1914-2007). He designed for example the iconic "The round chair " used in 1962 in the U.S. presidential campaign in a duel between Richard Nixon and J.F. Kennedy. By that the chair was immortalized and got the flattering epithet "the chair".

The guided tour starts at Design Museum Denmark. Here we see many examples of Wegner's furniture design and the development of ideas in collaboration with the producers.

After that we continiues to Carl Hansen & Son's flagship store (approximately 10 minutes walk).

Carl Hansen & Son is a family owned compagny establish in 1908 in Odense. The compagny is the largest producer of Wegner furniture especially known for the popular Wishbone chair. We will look at, investigate, try and talk about some of the furniture we have seen at the museum.