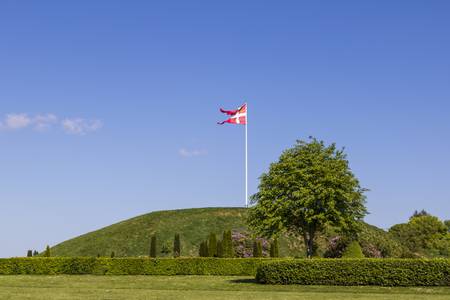 An eye-opening and thought-provoking visit to Jelling, the greatest Viking Age royal monument in the North and a UNESCO World Heritage Site.

Poised between two kings, two world views, the old faith and the new, between prehistory and history... The royal burial place and grand memorial at Jelling, with its manifold symbolism and iconic significance, is a spectacular monument of Viking Age Denmark. In our visit you will hear about the legends and troubled history of the beginnings of the Danish kingdom and its conversion to Christianity, wonder at some of the most fantastic examples of Viking runestone art, and experience this monument as a huge landmark in both history and landscape.

Two huge mounds dominate the royal complex. In between stands a medieval stone church, next to which two great stones stand precisely in the centre between the mounds: one raised by Gorm for his queen Thyra, the other by Harald in memory of his parents. The latter is an enormous runestone which boasts two of the most renowned and amazing carvings of the Viking Age: a beast fighting a coiling snake, and Christ in the shape of a cross bound by coiling ribbons. But it is also famous for the king's historically all-important claim, engraved in runes, of having "won" Denmark - and Norway - for himself and having made the Danes Christian.

The site is further complicated by traces of a gigantic ship setting marked in stones, and a huge palisade around the grounds.

As we explore the site and discover its tantalising symmetries and symbolism, I explain the complex and fascinating transition from Nordic heathendom to Christianity, of which the Jelling monuments give the most impressive illustration.

I also tell you about the most recent archaeological discoveries here: our understanding of Jelling constantly changes and improves, though it is a place that still holds many secrets from us.

Our visit ends with a tour of the Royal Jelling Exhibition Centre, a clever, informative and spectacular little museum offering a rich experience for the mind and the senses.

Optionally we can also visit the Viking-themed café Sejd in the village (3 min. walk), which tempts with great coffee, tasty Viking-inspired food and bits of Viking myths.

If your are visiting as part of a bus trip, the tour could also be combined with a visit to the Viking Age bridge at Ravninge Enge, another of Harald’s impressive construction works.

The guide is a historian and has worked in communications since 2008.