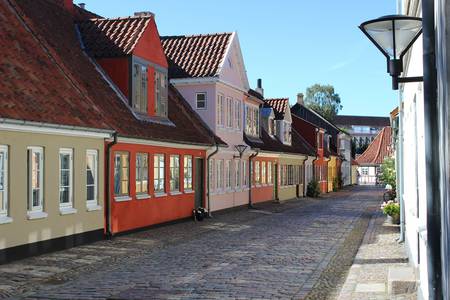 Odense has undergone a massive transformation the last few years, under the motto ''Going from being a big city to being a metropolis''. A wide 4-lane road was constructed through the city's beautiful old centre in the 1970's. That road has finally been removed and the inner city is slowly being reunited.

We'll take a walk through the city centre along the newly built areas that the new tram will go through. During our walk, I will tell you some of the interesting stories about all the problems and challenges that digging up the earth around here posed while the area was still under construction. Whether being problems with pipelines, electric cables or how on earth they managed to plant such beautiful trees on top of an underground parking space. Whether it's an ancient bishop's burial place or the well-known ruin from the 15th century that had to be moved once again. We'll also explore some of the inner city's beautiful secluded spots.

We'll walk in the beautiful Hans Christian Andersen neighbourhood, where I'll give you a detailed account of his life and we'll pass the house where he was born as well as the new museum which you'll see from the outside. Afterwards we'll take a walk along Odense River in Eventyrhaven towards Odense Cathedral, where I will tell you about Saint Canute's murder and the city's abbeys.

Coffee and/or lunch arrangements at one of the city's excellent restaurants can be arranged by Guideservice Danmark.