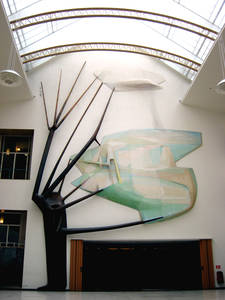 Experience one of the most beautiful buildings in Odense from the inside, which means the City Hall of Odense, situated beautifully opposite the cathedral. During the tour I will introduce you to rooms which are usually not open to the public.

When you experience the building from the inside you will see impressive architechture from the past as well as today and a perfect match of colours. You will see a magnificent painting Fynsk Forår, Spring of Funen, by Yann Kai Nielsen, the wedding room and the memory wall with good stories from the past and the present. The city counsel room and an anteroom with portraits of previous mayors by some of the best painters in Denmark are also on our list.

In the grand hall we find impressive frescoes by the Funen painter Johannes Larsen and I will explain about Hans Christian Andersen who was appointed honorary citizen of Odense exactly here in 1869 - in the old city hall used before the present one was built! As a must the tour also allows you a view of the Queen's State Rooms for when she visits Odense - only when the Queen is not present of course.