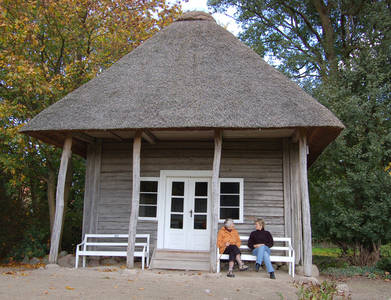 You find the one and only potato museum in Denmark in the beautiful Hofmansgave Botanical Garden.

I'll guide you on a tour of the museum which is set up in an old half-timbered house, where you can see the various tools used in the cultivation, harvesting and sorting of potatoes. I tell you about the potato history as well as the potato stories.

In the botanical park there are many different rare trees, some of which are up to 200 years old. For example there is a large and some smaller temple trees, originating from Japan, bearing the Latin name Ginkgo Biloba. The Ginkgo tree has some very distinctive fan-shaped leaves. The tree has had a quite significant medical importance. You can also see some of the old French dwarf fruit trees, of which in 1850 were planted approximately 1200 pieces in the garden. The trees were unique at the time and were admired by fruit farmers from near and far because of the rich fruit farming.

In the park there are also the "Alps" with a mountainous landscape built of large stones by Jacob Hofman-Bang around 1855.

On the tour in the park you will find a large wooden house. From the bench in the front of it you can enjoy the wonderful view of Odense Fjord. I shall tell you the story of the house.

The tour can be combined with other excursions around Otterup for example Enebærodde, which is a protected uninhabited peninsula or the Love Trail, where you can experience the figures from Hans Christian Andersen's fairy tale "The Tinderbox", carved in elm trees.