Roskilde, the First Capital of Denmark 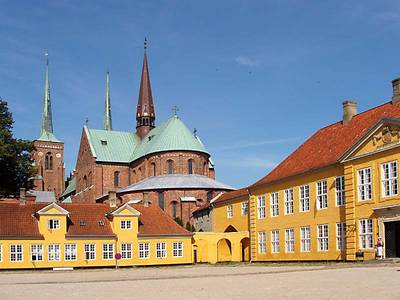 For you who are particularly interested in the history of Denmark and the Vikings tihs is the perfect tour.

We can meet in Roskilde or we can go from Copenhagen. We will go west to Roskilde and drive along the fiord, where affluent foragers lived 7000 years ago. From here we shall continue on a detour south of Roskilde to the area of Lejre and make stops at burial mounds from the Danish prehistory covering the Neolithic Period, the Bronze Age and the Iron Age, all in all from 6000 to 1200 years ago. I tell you about the things we see, as we drive through the picturesque landscape of the region.

We shall focus on the Vikings and will make stops at the Halls of Lejre and the "skibssætninger", which are stone rows in the shape of ships. Put together, these features make up substantial evidence that important men and women lived and died here.

Coming back to Roskilde, the city that was made the country's first capital by the Vikings, we shall visit the Viking Ship Museum. The museum houses the wrecks of the five ships discovered at the bottom of the fiord in 1957. The ships were deliberately sunk in the late 11th century in order to stop the advance of a hostile Norwegian fleet, and they have now given us some of our most precise knowledge of ship-building and sailing a thousand years ago. Apart from the various Viking craft workshops that are run at the museum grounds there is a shipyard staffed by boat builders who construct new ships using the ancient techniques.

It was in Roskilde that King Harold Bluetooth had the first Christian church of Zealand built in 980 and subsequently claimed to have christened the Danes. That was probably not quite true, as it was customary in the Viking Age to carry the hammer-pendant of the old Norse god Thor. I will tell you about the Viking mythology as well as the use of runes.

Our final destination of the tour will be Roskilde Cathedral, the latest descendant of King Harold's wooden church. The first bricks of the present building were laid in 1170 during the era of Bishop Absalon, but in the course of time it has been gradually extended by still more chapels in order to make space for the marble sarcophagies of the Danish kings and queens. The earliest is that of Queen Margrethe I, who died in 1412, fifteen years after she had united the giant Nordic realm.

The sequence may be altered because of service hours in the cathedral.