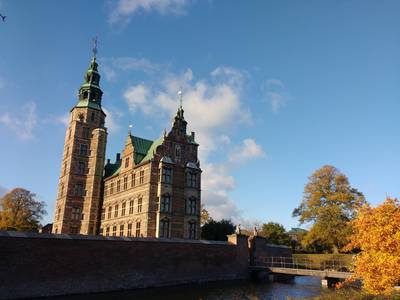 Experience one of Denmark's most well-preserved castles. Rosenborg is home to the Danish crown jewels, but also has a unique collection of art, furniture, and quirky items.

We will explore the favorite castle of king Christian IV, known as the great "builder king" in Danish history. We will admire the magnificent furniture and decorated rooms, while learning about the sometimes funny, sometimes sad stories of kings and queens of the past.

Experience the story of Christian IV's death and see the treasures from his legendary battle against the Swedes, which provided inspiration for one of Denmark's national anthems.

Learn about the royal scandal that resulted in the creation of the current Queen's Crown and discover the sarcastic "gift" that a king gave to his unfaithful wife.

We start the tour with a visit to Rosenborg Castle, which was previously the kings' summer house outside Copenhagen's city limits. We visit the well-preserved rooms where the royal family previously lived and see the crown jewels in the basement, which are some of Europe's oldest.

Afterwards, we will stroll through the King's Garden, greeting Hans Christian Andersen's statue along the way, and wander through king Frederik V's distinguished "City of Frederik" to Amalienborg Palace. Here you can admire one of the most beautiful palace squares in Northern Europe, admire the royal guards, and learn why the four mansions of Amalienborg jointly became the royal family's permanent Copenhagen residence.

Depending on how early you want to start the tour, we can finish by seeing the royal guard exchange at noon. The tour can also be extended to a long city walk in Copenhagen.