The Old Town Museum in Aarhus 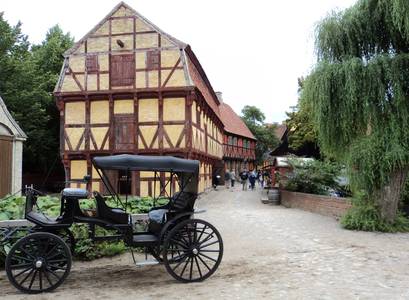 The Old Town Museum in Aarhus is the world's first open-air museum for the culture and history of market towns, and first opened its doors in 1909.

Today the museum is visited by more than 350,000 guests a year, and has been rewarded the maximum 3 stars by the world-famous Guide Michelin.

The museum houses 75 houses from different areas in Denmark, and walking around the Old Town Museum is like jumping into the time machine and experiencing life as it was in a typical Danish city from the 16th to the 20th century, complete with shops, horse drawn carriages and people dressed as they would have at the time of Hans Christian Andersen the famous Danish fairytale writer.

I invite you inside many of the historic buildings, including the building that used to be opposite Hans Christian Andersen's childhood home in Odense, which was where he was first introduced to the wonderful world of books. I shall also show you the 17th-century pharmacy packed with mysterious medicines and the associated Baroque pharmacy gardens with about 100 different herbs.

Are you more interested in recent history and do you remember Bob Dylan, the hippies and your first television? Then you can also experience the year 1974 which is now part of the Old Town Museum. In this part of the museum I can walk you down the avenue of memories, where we stop at the sausage trolley, flatten our noses at window at Poul's Radio or visit the collective.

Whether you are fascinated by old or recent history it is also a good idea to set aside time to enjoy some traditional Danish cakes from The Old Town Bakery as well as a cup of tea or coffee after the tour.