Tønder - the Town of Laces 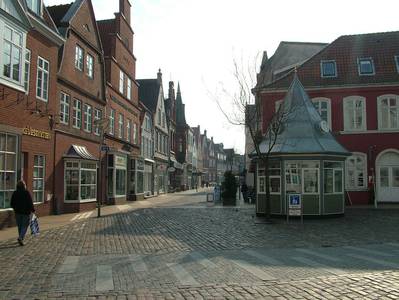 Through the centuries, the town of Tønder has been situated far away from beaten tracks and in the shadow of Ribe. But do not underestimate the town's charm. Let me show you on a guided tour of Tønder.

Tønder is the smallest market town of South Jutland, and after the approximate year of 1500, where it was impossible to get big ships to moore in Tønder the town has lead a pretty quiet life. This has been the reason - a blessing in disguise - that the old city centre has kept a lot of its distinctive historical character as a marsh town.

The church of Christkirken is particularly worth a visit, as well as the market square, the city's former harbour "Skibsbroen", "Spiker"- and the street of "Uldgade" and Vidå Sluice with its coastal dikes are also quite intesting.

During the town walk I put a particular emphasis on narrating about life in the marshes, the duke's role and the particular significance of laceproduction for Tønder.

This town walk is quite short as well as easy for visitors who don't walk so well.

The tour can be combined or extended with a visit in Møgeltønder ( + approximately 75 minutes) as well as a visit in Løgumkloster (a further + 60-75 minutes). The full packet: 4 hours, including the drive between the towns).