Aggersborg is the largest Viking fortification found in Denmark.

Aggersborg is one of several Viking fortresses built in the reign of King Harald Bluetooth. The other fortresses are found at Fyrkat at Hobro, Nonnebakken at Odense, (now destroyed), Trelleborg at Slagelse and Trelleborg near Skåne (formerly a part of Denmark, but now a part of Sweden). All of the fortresses follow the same geometric pattern. 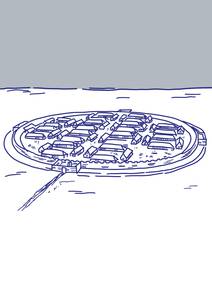