Christian IV (1577-1648) was one of the most important monarchs in Danish history and is well-known for his edifices.

Christian IV was born at Frederiksborg Palace, the son of King Frederick II and Queen Sofie of Mecklenburg. He succeeded the throne at the young age of 11 and the country was effectively run by the Rigsråd or Royal Council until 1596 when he turned 19 and assumed full power.

Christian IV elevated and upliftet the Danish Navy and sent out expeditions to Greenland, North America and India. The voyage to India led to the foundation of the Danish East India Company and to the nation's first colony in Tranquebar in 1620. The Danish economy boomed in this period and Christian IV built the countries first stock exchange, Børsen in Copenhagen in 1619.

Christian IV was a true Renaissance king and was a patron of both the arts and architecture. Many of the buildings from his time can still be seen in Denmark, especially in Copenhagen, which under his guidance was transformed from a crowded medieval city into a true Renaissance capital. Several towns were also founded by him including Christianshavn (now a part of Copenhagen), Kristianstad (now in Sweden) and Kristianstad (now in Norway).

Had his reign lasted until 1625, his legacy would surely have been one of the greatest of all Danish kings. However, beginning in that year he dragged Denmark into a series of disastrous wars. First, his armies were defeated by the Holy Roman Emperor in the Thirty Years War and then they were defeated again in the Torstenson War against Sweden. This final defeat meant the loss of Denmark's Baltic possessions and would ultimately pave the way to the loss of Skåne.

Christian IV loved women and he had twenty-four children by two wives and three mistresses. His son with Queen Sophie of Mecklenburg, Frederick III, followed him on the throne. Christian IV's legacy in Denmark, even after the disastrous wars, still lives on and he is percieved as a very good monarch. He was Denmark's longest reigning monarch at 59 years and during his reign he made many positive changes in the country. The Danish national play Elverhøj features Christian IV in the main role and his heroic actions at the Battle of Kolberger Heide, where he lost an eye, inspired many romantic paintings. He is buried in his own elaborate Renaissance chapel in Roskilde Cathedral. 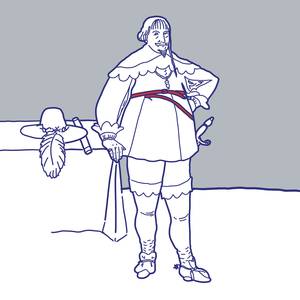 Tours that also include Christian IV