Denmark's largest boulder. It is located close to the Funen village Hesselager. It contains at least 370 m3 and weighs 1,000 tonnes. The stone is partially excavated and is measured at 10 meters high and has a circumference of 45,8 m. The boulder goes under several different names: Dammestenen, Damestenen or Hesselagerstenen.

Only the top of the Dammesten was above the ground until it was excavated on the one side to the bottom edge in 1843. The stone is mentioned by the Danish theologian Erik Pontoppidan in his two-volume work: The Danish Atlas from 1763-64. The geologist Johan Georg Forchhammer examined the stone, but could not determine its size. Therefore, in 1840 he suggested an excavation of the stone. Forchhammer believed that the shape and rounding of the stone were caused by friction stripes and that this proved that the stone had previously been lying at the bottom of the sea. Therefore, the stone must have been part of a solid rock.

But today it is believed that the stone came from the Baltics with a glacier during the ice age. The stone was stucked in the soil, and the glacier covered the stone causing its friction stripes. 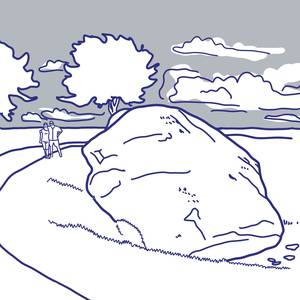 Tours that also include Damme Stone