Louise Rasmussen (1815-1874) was the illegitimate child of an unmarried maid. She was later appointed Countess of Danner.

Louise Rasmussen was admitted to the Royal Ballet School in Copenhagen in 1826.

Louise Rasmussen became acquainted with the later King Frederik 7. whom she married "to the left hand" in 1850. On the same day, a royal decree was passed and Louise Rasmussen was ennobled to feudal countess of Danner. The couple's marriage gave offence in conservative circles, while the fast-growing Society of the Friends of Peasants (Bondevennerne) regarded Countess Danner as a symbol of a new popular era.

Danner bequeathed several gifts for the benefit of the needy and poor, for example the current Dannerhus in Copenhagen, which is a home for battered women. 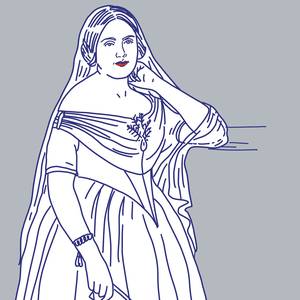 Tours that also include Danner, Countess