Eric was born Boguslaw in Darlowo (Rügenwalde) in modern day Poland. His father was the Duke of Pomerania Wartislaw VII and his mother was Mary of Mecklenburg-Schwerin. He descended from kings of Norway, Denmark and Sweden and therefore had a claim to all three thrones. In 1389, he was brought to Denmark by his relative Queen Margrethe I, where his name was changed to Eric.

On 13th June 1397 he was crowned king of the three Nordic countries in the cathedral of Kalmar. A treaty was created at the same time, leading to the beginning of the Kalmar Union with Eric as its head although Margrethe remained de facto ruler until her death in 1412.

In 1402, Margrethe met Henry IV of England about a possible alliance between the Kalmar Union and England. Eric married Philippa of England, the daughter of Henry IV, at Lund Cathedral in 1406. In 1416, Eric made Copenhagen a royal possession and also the new capital of Denmark, which it has remained to the present day.

In 1430, Queen Philippa died and Eric took her lady in waiting, Cecilia, as his mistress much to the disgust of the nobility and Church. During the 1430s, the Swedish and Norwegians rebelled against his rule and he was faced with constant opposition from the Danish nobility. Finally in 1440, he had had enough and abdicated in favour of his nephew Christopher of Bayern, who became King of Denmark.

Eric moved to Visborg Castle on Gotland which he ruled for the next ten years. During his rule, he lived by piracy on merchant ships in the Baltic Sea. In 1449, he became Duke of Pomerania which he ruled until his death in 1459. He is buried in St Marys church in Darlowo. 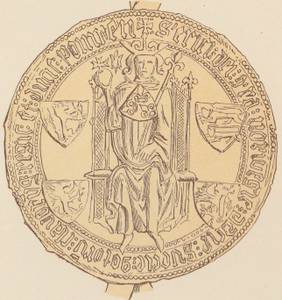 Tours that also include Eric of Pomerania