Fishing weirs are a kind of permanent fish-trapping arrangement that resemble the trapping mechanism of the fyke net. Danish fishing weirs could usually be found by rivers and lakes.

In principle, the fyke net leads the fish into a more and more narrow area until the fish is trapped behind an obstacle or is unable to find its way out again.

The fishing weirs had different designs depending on what fish they were supposed to trap. In Denmark, these were primarily salmon, trout and eel. Wooden posts with wattle fences in between them obstructed the passage of fish in streams where this was allowed. As the fish sought up the river (salmon and trout) or down the river towards the sea (eel) they were caught in a box, in shallow water or in a kind of "casket".

The most common weirs were eel weirs, also called eel caskets. These weirs were placed by the water lock of watermills where the eels were trapped in the casket on their way out to sea. The sides of the casket consisted of a wattle fence and the bottom of some kind of grid.

The salmon weirs had a funnel opening in the wattle fence that guided the salmon into a box. From here, the salmon would be unable to escape.

Mills and dams were the only ones to have trout weirs. These were sometimes called a trout hedge. The trout was trapped by tricking it to jump over the hedge into a demarcated area. In this area, the water level was very low and the trout would be unable to gain enough speed to jump back over the hedge. 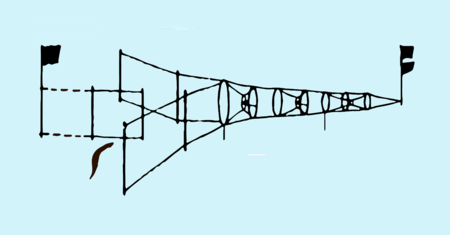 Tours that also include Fishing Weir