Frederik III (1609-1670) was King of Denmark from 1648. He introduced the absolute monarchy in Denmark in 1660 and was married to Sofie Amalie of Brunswick-Lüneburg.

Frederik was the second oldest son of King Christian IIII. His big brother died shortly before Christian IIII in 1647, which made Frederik the obvious choice as the new King of Denmark. Christian IIII used his son as a strategically important piece in northern Germany, where he made sure Frederik became duke of Bremen.

In 1643, when Frederik was 34 years old, he married the then 15 years old Sofie Amalie of Brunswick-Lüneburg. Despite of the age difference, they had a rather strong marriage. The couple was blessed with 8 children.

During his accession in 1648, Frederik was forced, by the estate of the realm, to accept a very strict Haandfæstning (a coronation charter). His position, according to the Danish nobility, was therefore weakened from the beginning, since the nobility had requested several demands through the coronation charter.

However, Frederik III had a good political understanding and he and his advisors understood how to take advantage of the opportunities and strengthen his position in front of the Danish nobility. The final turning point came with the Dano-Swedish war, which paved the way for absolute monarchy to be implemented in Denmark. Thereby, Frederik III became the first King in Denmark to have absolute monarchy. 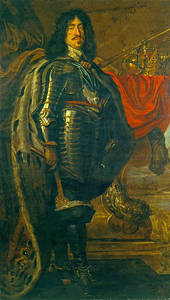