Gundtvig was inspired by the Romanticism while working as a private teacher at Langeland. The Romantic Movement created a foundation for Grundtvig's studies of Nordic Mythology and History. He always belived more in the "living word" rather than the fixed word of bible studies.

In 1838, Grundtvig achieved acknowledgement and became rather popular following his historical lectures "Mands Minde". In these lectures, Grundtvig was inspired by events in his own life and talked about these in connection with a broader world history.

Grundtvig laid the foundation of the first "Folkehøjskoler", or "Folk High Schools". In these, even the peasants could be educated.

In 1848-49, Grundtvig was chosen as a member of the Constituent Assembly even though he had been a supporter of the absolute monarchy.

Grundtvig wrote more than 1500 psalms. A lot of these are featued in the Danish hymn book. Grundtvig and his thoughts about society and faith has had a great significance on Danish popular culture and the Danish nationality. 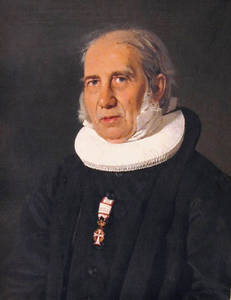