A Håndfæstning (or Haandfæstning) was a promise given by the king to the noblemen.

The Danish Håndfæstning can be compared to a coronation charter or the Magna Charta.

Originally, the chosen king would present an oral oath to the noblemen. However, Erik Klipping was the first Danish king to be forced to issue a written Håndfæstning in 1282. This included restrictions to the king’s power in agreement to the noblemen and other privileged groups in the Danish society.

Therefore, the Håndfæstning became a written obligation, instead of an oral one, which was supposed to be accepted by both the new king and the nobility. The Håndfæstning often included the different restrictions / limitations to the king's power and his promises to the nobility.

The Håndfæstning was mostly an advantage for the noblemen, where they could force the new king to agree upon different aspects that were important to them and their livelihood.

If the king did not respect the boundaries set in the Håndfæstning, the king's subjects had the right to renounce their loyalty oaths and rebel against the king and his rule.

King Frederik III put an end to the tradition with his state coup in 1660, where he introduced and implemented the order of succession and absolute monarchy. 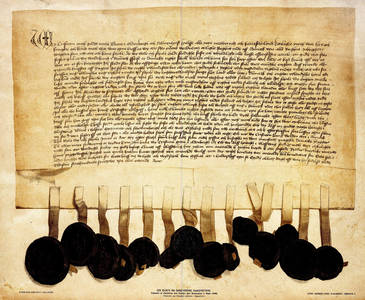 Tours that also include Haandfæstning (a coronation charter)