H.C. Andersen wrote plays, poems and novels, but is mostly remembered and known for his fairytales. Even though they are very critical of the contemporary society, they appealed to both adults and children - and still do today.

Hans Christian Andersen died unmarried and without children. He is probably the most famous og well-known Danish author throughout the world. 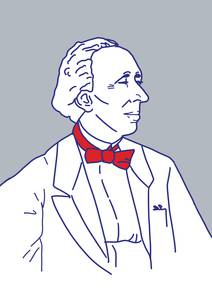