When Gorm the Old died in 958, Harald had him buried in a burial mound in the pagan way at the royal centre of Jelling.

Harald converted to Christianity in the 960s under the influence of the Holy Roman Emperor Otto I. Shortly after this conversion, Harald had his father reburied in a new church built at Jelling. Harald also raised a magnificent runestone there called "Jellingstenen".

Harald oversaw many building projects in his reign including the bridge at Ravning Enge and the refortification of the Dannevirke. He is best known for his five great Ring Fortresses at Aggersborg, Fyrkat, Nonnebakken, Trelleborg by Slagelse and Trelleborg near Skåne in present Sweden.

After centralising his Danish kingdom he conquered Norway but was thwarted in his conquest of Sweden by the Swedish prince Styrbjörn the Strong. Harald was killed in 986 fighting a rebellion by his son Sweyn Forkbeard, who succeeded him as King of Denmark. Harald was buried in Roskilde Cathedral, at that time a small wooden church.

It is not sure why Harald was named Bluetooth, it could be from a prominent dark tooth in his mouth or it could be a corruption from the Old English work meaning "dark chieftain". The modern Bluetooth wireless technology is named after Harald. The Intel computer engineer Jim Kardach was given the book Longships by Frans G Bengtsson by a Swedish co-worker in 1997. The book featured Harald and his ease of movement all over Scandiavia and inspired Jim Kardach to name the new technology he was working from after him. The logo for Bluetooth is the combined runes Hagall (H) and Bjarkan (B), that stand for Harald Bluetooth. 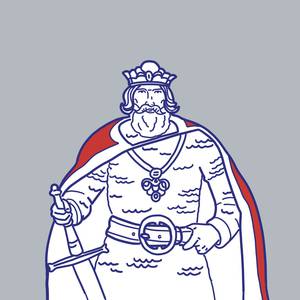 Tours that also include Bluetooth, Harald