Ogier the Dane was a mythical character and a Danish national hero.

In the myth about Ogier the Dane it is told that: "når Danmark stander i våde, så vil Holger Danske vågne op til dåd.” which translates to: if Denmark is in danger or at war, then Ogier the Dane will wake up and save Denmark.

Ogier the Dane is the main character of a heroic ballad from approx. 1200, called "La Chevalerie d'Ogier de Danemarche". Here, he is described as the son of Gudfred (c. 810), a Danish Viking-king and the enemy of Charlemagne. Ogier the Dane is given as a security measure to Charlemagne to prevent further war between Francia and Gudfred’s kingdom.

In 1907, Hotel Marienlyst in Elsinor, put up a bronze statue of Ogier the Dane. The sculptor, Hans Pedersen-Dan, made the bronze statue after a big plaster figure. This was placed in Kronborg’s casements afterwards and is today much more popular than the actual statue.

Today, the bronze statue is owned by a businessman from Skjern and is mounted in Skjern’s town center. 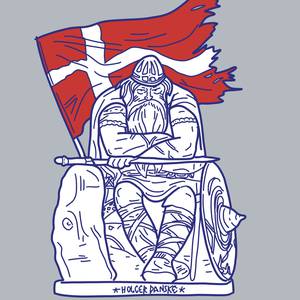 Tours that also include Ogier the Dane (Holger Danske)