A piggy bank is a money box shaped like a pig.

The pedagogical tradition of teaching children the value of money and thrift by giving them a money bank, or money box, can be traced back to the ancient Greeks and Romans. The classic shape of a box with a slit in the top gradually transformed to comprise a plethora of different shapes and sizes.

In 18th century Europe, especially in Germany and the Netherlands, it became popular to give money boxes in the shape of a pig as gifts on New Year’s Eve. This is where the term piggy bank originated. The tradition of the piggy bank soon spread to England and the United States of America. Pig-shaped money boxes can also be traced back to Asia as far back as the 15th century.

The pig is assumed to be a symbol of fertility and thrift. The popular shape may also have been inspired by how economic it was to keep pigs at that time. Pigs often functioned as a long term investment for many families living in the countryside. The pig was fed leftovers and once it had grown big and fat, it could be sold to richer families. The money could then be used to buy cheaper sources of food.

Back in the day, the piggy bank had to be smashed to pieces in order for the owner to gain access to the money inside. This is why so few piggy banks have survived in one piece. Today, most piggy banks have a hole in the bottom, making it possible to empty out the coins without having to break the piggy bank.

The renowned Danish writer H.C. Andersen wrote a fairy-tale called "The Money Box" (or "The Piggy Bank"). In the story, the piggy bank is used as a symbol of life and death or the carousel of life. The piggy bank, which has no more room for coins and thus has served its purpose in life, is smashed on the floor so that the owner can access the coins. The smashed piggy bank is then replaced by a new empty piggy bank, waiting to be filled up with coins. 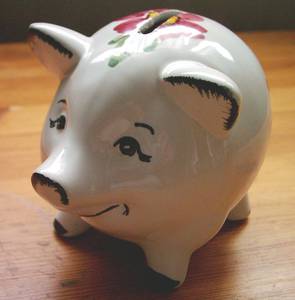 Tours that also include Piggy Bank, the