Svend Poulsen (1610-79), also known as Gønge, was an officer in the Danish army during the Dano-Swedish Wars. He was the leader of the Danish resistance known as “Snapphane”.

Svend Poulsen's year of birth is unknown, but it is usually written as 1610 due to Svend Poulsen’s engagement in the Thirty Years War in 1625. At that time, Svend Poulsen was approx. 15 years old.

He was born in the Gønge district, which is located between Skåne and Halland. At this time, Skåne was still a part of Denmark and functioned as a borderland to Sweden.

Svend Poulsen became a captain in the Danish army as the war between Denmark and Sweden broke out once more in 1657. In the following years, he became leader of the Danish resistance in the southern parts of Zealand. The resistance fighters were referede to as "Snaphanerne". After the war, Svend Poulsen was rewarded by the Danish king and was given the manor Lundbygaard in Southern Zealand.

Svend Poulsen also participated in the Scanian War, where he was appointed major. During this time, he was given the nickname Gønge. 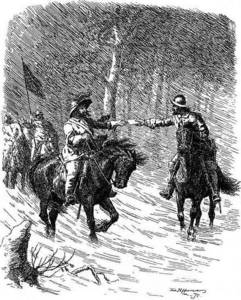