The Flame (1921-44) was a member of the Danish resistance group Holger Danske during the German occupation of Denmark. In cooperation with his partner Citronen (the Lemon), he carried out a series of assassinations of informers (1943-44). The Flame died when the Gestapo attempted to arrest him.

The Flame's real name was Bent Faurschou-Hviid, and he came from North Sealand. He was given the nickname "The Flame" because of his vibrantly coloured red hair. In 1943, the Flame became a member of a small resistance group in the Holbæk-area, which was responsible for sabotage and for the printing of illegal newspapers. Later that year he moved to Copenhagen, where he became a part of the resistance group Holger Danske. It was there he met The Lemon, who became his regular partner in the informer assassinations.

A close friend of the The Flame, Svend Otto Nielsen, called "John", was betrayed to the Gestapo in 1943 by a Danish informer. He was subsequently executed. It was after this incident that The Flame began assassinating informers.

He and the Lemon are credited with 11 assassinations.

Due to the many assassinations, the Flame was on the top of the Gestapo's most wanted list during the occupation. They had great trouble locating him and ended up arresting random redhaired men on the street.

In 1944, the Gestapo managed to track him down, and he committed suicide by swallowing a capsule of cyanide.

The Flame and his partner, the Lemon, are buried in "Mindelunden" in Ryvangen. 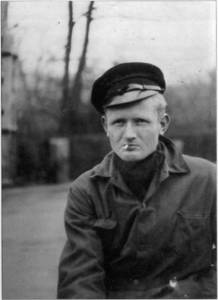 Tours that also include Flame, the