Corfitz Ulfeldt (1604-64) was a Danish nobleman, employed at the court of King Christian 4th. He served as Steward of the Realm, among other positions. In 1630 Corfitz Ulfeldt became engaged to the king's daughter, Leonora Christina, and they were married in 1636.

The ascendence of Frederik 3. to the throne heralded the end of Ulfeldt's career, and he was forced to flee from Denmark with his wife in 1651. They went to Sweden, where for a time Ulfeldt found refuge at the court of Queen Christina. Unfortunately that relationship soured as well, and Ulfeldt fled back to Denmark, where he and his wife were imprisoned at Hammershus on the island of Bornholm, until later released on the authority of the crown.

Corfitz Ulfeldt died in exile as a sick and broken man. He was executed "in absentia" and a pillar of shame was erected in his name in Gråbrødre Square in Copenhagen. 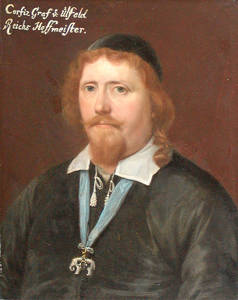