Oluf Bager and His Life. Renowned Merchant from Odense. Lecture by Mette

Oluf Bager, was a renowned merchant in Odense in the 16th century even one of the richest merchants in Denmark at his time. This lecture gives you lots of input into the person Oluf Bager and why a restaurant is now named after him.

His maternal inheritance was among other things his maternal comlex of houses in the street Nørregade in Odense. Today you will find lots of offices, a number of shops and a restaurant in the buildings. Very nice buildings with an interesting story to be told.

Not far from Oluf Bager's Maternal Buildings is the St Hans Church with an epitafium for Oluf Bager and his family. This will be included in the lecture.

Enjoy the story about Oluf Bager's life in Odense, about the person Oluf Bager and some of his contemporaries and have the story brought all the way up to modern days. Guess how Hans Christian Andersen however remotely was connected to Oluf Bager. Experience the places with a storyteller who loves the story of Oluf Bager and his maternal inheritance.

The lecture Oluf Bager, a wellrenowned merchant in Odense in the 16th century can easily be combined with a guided walk in the city and a visit to one of Odense's good restaurants. Perhaps you would like to enjoy a coffee, lunch or even dinner listening to his captivating story. The story can be told in between the causes or while you are having coffe and afterwards all the places can be visited with the lecturer. On a lucky day you might even get a chance of listening to the acustics in St. Hans Church.

If you combine the lecture Oluf Bager, wellrenowned merchant in Odense in the 16th century with the citywalk it will of course last longer than the one hour. 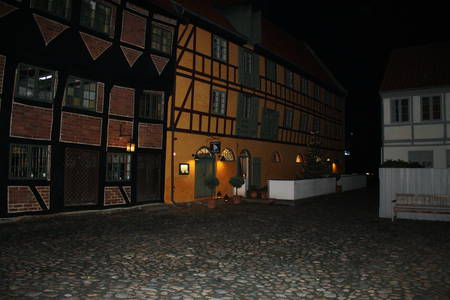