The Weather War in Greenland 1942-44: The Danish Sledge Patrol and the German Weather Stations.

In Greenland during World War II, a struggle about weather data was fought out. In the years 1942-44, the Danish Sledge Patrol detected two secret German weather stations on the uninhabited Northeast coast, and after the first encounters, a small-scale war was unfolding. We will explore the original locations of these dramatic events, and tell the storyline on the basis of the written accounts from both sides of the conflict.

The desolate coast of Northeast Greenland became the arena of a series of military clashes under World War II. Meteorological expeditions sent out by the German Wehrmacht, regularly attempted to establish secret weather stations on the long, uninhabited coast. Not all of these operations were successful, but two of them actually succeeded in establishing a station and wintering undetected, sending the valuable weather data home by radio on a daily basis.

The German activities in Greenland, nevertheless, were counteracted by the Northeast Greenland Sledge Patrol, a small defence unit of 10-12 men under Danish leadership - the predecessor of the Sirius Patrol, which still today secures Denmark's sovereignty in those remote areas.

But who were these people, who were sent out to fight in the High Arctic, and how did they manage their task?

In 2008 and 2010, an archaeologist and a historian - me - from Denmarks National Museum set out to visit the locations in Northeast Greenland, where the clashes between the Sledge Patrol and the German weather men had unfolded. The ruins of the German and Danish wintering stations are still visible in the High Arctic landscape, and they have proved to be exceptionally well-preserved. In combination with the preserved written sources, e.g. private journals of the Danes and Germans, reports, telegrams etc., these ruins can tell us a lot about wartime everyday life in the High Arctic.

In the course of the lecture, we will become closely acquainted with the Danes and Germans, who spent two winters in Northeast-Greenland (1942-44). Most of their time was spent with the monotonous rhythm of the weather observations, but as soon as the counterparts became aware of each other, a cat-and-mouse game was unfolding all across the vast Northeast Greenland fiord systems. We will also learn that even though the Danes and the Germans found themselves opponents in regards to the war's clearly defined front lines, some of them ended up establishing quite a good rapport with each other - that is, of course, once they had stopped firing.

I will show lots of pictures of the artefacts, which we registered on the original locations in Northeast Greenland in 2008 and 2010, so we can experience the wings of history in the fantastic High Arctic environments together. 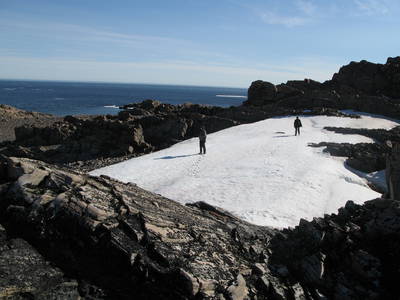