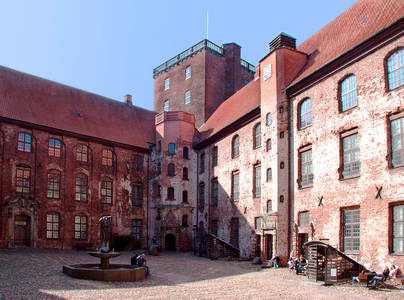 The medieval castle of Koldinghus located on the hill by the lake, is welcoming travellers to the Kingdom of Denmark. Kolding was the gateway to Denmark from the south until the war in 1864.

The castle was burned down in 1808, after which the ruin was used as a quarry until Hans Christian Andersen passed by.

The castle was renovated in the late 1900s. Today the ruins are preserved within the new stunning architectural design. The palace is the major attraction in Kolding, but the rest of the medieval city also has some remarkable stories such as the war in 1849 between 50.000 Prussian soldiers and 40.000 Danish soldiers and the border crossing over the Kolding river to the duchies to the south.

Recent stories like that of the renowned baker, Bertram Knudsen: "it is all about the butter", and Chresten Berg, who started the liberal newspapers in Denmark, are also stories to be revealed on a guided walk in Kolding.