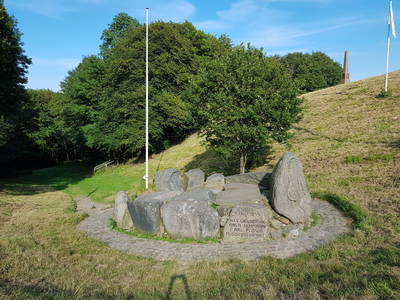 A guided tour on Skamlingsbanken: hear about Denmark's national sentiments during the first half of the 19th century.

Steen Blicher started the first popular meetings of the Romantic Era on the hill Himmelbjerget in 1839. This became the inspiration for many subsequent popular meeting places around the entire country. In 1843 local farmers bought the area surrounding Southern Jutland's highest point, Skamlingsbanken, located approximately 10 km south of Kolding.

A guided tour on Skamlingsbanken will give you an in-depth picture of Denmark's national sentiments during a time when ideas about nation, language and nature were experiencing a revolution. After a Danish defeat in 1864, ceding Southern Jutland to Prussia, Skamlingsbanken became highly symbolic for the struggle to reunite the area with the rest of the realm.

The story about the events of 1864 and the separation and reincorporation of Southern Jutland certainly define this area and will be presented to you in a professional, interactive way. Narrations about these two historical events will be combined with the beautiful natural sights around, to not only give you an idea about the area but all of Denmark and its history as well.